Liberty Tree Academy prepares students through a traditional, content-rich education in a disciplined and orderly environment, to be self-governing citizens who are equipped to carry out the vision of our Nation’s Founders to preserve and perpetuate liberty.

Liberty Tree Academy is dedicated to an authentic, traditional American education, to be a community that actively cultivates character in a challenging and engaging learning environment.

“We do, therefore, in the name and behalf of all the true Sons of Liberty in America…dedicate and solemnly devote this tree, to be a Tree of Liberty.  May all our councils and deliberations under its venerable branches be guided by wisdom, and directed to the support and maintenance of the liberty, which our renowned forefathers sought out and found under trees in the wilderness.  May it long flourish, and may the Sons of Liberty often repair hither, to confirm and strengthen each other. When they look towards this sacred Elm, may they be penetrated with a sense of their duty to themselves, their country, and their posterity.” ~Silas Downer

The Importance of a Name

Liberty Tree Academy, founded in 2018, is to become a place where our community can come together to learn, exchange ideas, and grow in the founding spirit of America.

Early on, the founders of LTA were advised that a more geo-centric name should be used: like Falcon Classical Academy. Nice name, but it didn’t come close to describing the goals that motivated the founders to spend the countless months of work that the charter school application process required.

Only the name Liberty Tree Academy with its historical significance could come close to what was intended for this exceptional school committed to offering a genuine Traditional American Education of classical liberal arts to our community. LTA is a home for big ideas. During these historical times, the community needs a place where big ideas can be discussed.

The original Liberty Tree was a famous elm tree that stood in Boston near Boston Common. The mighty elm served as a meeting place for independent-minded colonists in the years before the American Revolution.

In 1765 the British government imposed a Stamp Act on the American colonies. Outraged by Britain’s attempt to tax all legal documents, a group of local businessmen calling themselves the Loyal Nine began meeting in secret to plan a series of protests against the Stamp Act. Their group would later grow to become known as the Sons of Liberty. The tree became a rallying point for the growing resistance to the rule of Britain over the American colonies. The ground surrounding it became known as Liberty Hall, a place for colonists to take part in public life. 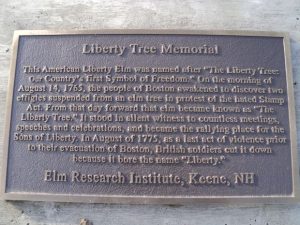 When the Stamp Act was repealed in 1766, the townspeople gathered at the Liberty Tree to celebrate. They decorated the tree with flags and streamers, and when evening fell, hung dozens of lanterns from its branches.

When the British cut down the Liberty Tree in 1775, it was said by the colonists that Liberty Trees would spring up all across the land. [1]

It is our hope that Liberty Tree Academy, just like the liberty tree, will provide a rallying place, uniting patriots, to further the pursuit of freedom set forth by our Founding Fathers.