Douglass was an accomplished man: among other things he was an orator, an author, a friend of President Lincoln and before all that… a slave.

Think about that.  A man with those abilities was consigned to a life of misery who discovered knowledge could set him free.  He acted on what he had learned and became an example for us all. His life is an irreplaceable part of the American story.

You should take time to know it.

Frederick Douglass had every right to resent America and its founding.  He did for a while but as he studied the Constitution and the Declaration of Independence, he became convinced it was an anti-slavery document and was not afraid to say so publicly even as he chastised those who enabled that great wrong.  Although abused by self-proclaimed hypocritical religionists, Douglass did not abandon his faith. He is a genuine American hero.

Our goal for all students at LTA is to instill a hunger for knowledge and the opportunity it provides.  Douglass described that hunger as follows:

When I was twelve or so, I was leased to my master’s relative. For a time, my mistress taught me my ABCs, and would have gone further had her husband not forbidden it. He thought that education would make a slave unruly and discontented. He was right: the more I learned, the more determined I was to be free. I carried books with me whenever I was sent on an errand, and traded bread for reading lessons from the little white boys playing in the street. When my master’s son left school, I secretly copied the handwriting in his practice book, and then challenged the street boys to handwriting competitions. I learned to read and write in the only way possible for a slave: I stole the knowledge.

We don’t face the horrors of slavery Douglass faced but the world is rapidly changing in ways that would potentially crush our freedoms.  We need to realize that to truly be free, we have to take responsibility to educate ourselves.

Douglass was born in Talbot County, Maryland in approximately 1817.  He grew up on the Wye Plantation. He wrote of his struggles in his autobiographies.  They are at once a sickening account of man’s inhumanity to man but at the same time a dramatic and inspiring story of his burning desire to be free.  He seized upon the opportunity to learn to read and studied the Columbian Orator (a book bought with money he had earned shining shoes) to develop his speaking ability.  When he had escaped to New York and spoke at abolitionist gatherings and other venues, he spoke so well the attendees could not believe he had once been a slave.

Consider some of Frederick Douglass’ words.

… the Declaration of Independence is the ring-bolt to the chain of your nation’s destiny; so, indeed, I regard it. The principles contained in that instrument are saving principles. Stand by those principles, be true to them on all occasions, in all

places, against all foes, and at whatever cost.

They [founders] were peace men; but they preferred revolution to peaceful submission to bondage. . .They showed forbearance; but that they knew its limits. They believed in order; but not in the order of tyranny. With them, nothing was “settled” that was not right. With them, justice, liberty and humanity were “final;” not slavery and oppression.

…the Constitution is a glorious liberty document.

…take the Constitution according to its plain reading, and I defy the presentation of a single pro-slavery clause in it. On the other hand it will be found to contain principles and purposes, entirely hostile to the existence of slavery.

I do not despair of this country.  There are forces in operation, which must inevitably work the downfall of slavery. “The arm of the Lord is not shortened,” and the doom of slavery is certain. . .While drawing encouragement from the Declaration of Independence, the great principles it contains, and the genius of American Institutions, my spirit is also cheered by the obvious tendencies of the age. 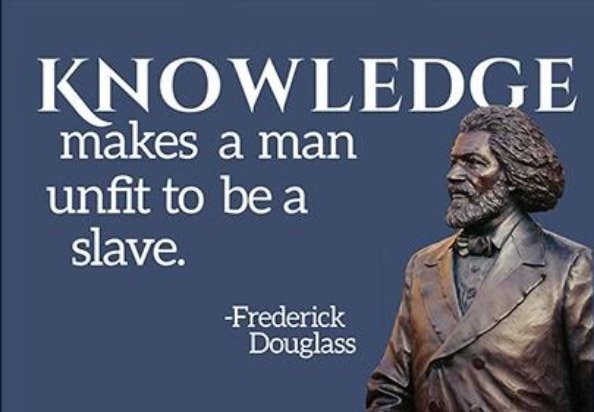